As Washington looks to pass a new infrastructure bill to fund a variety of projects, it will certainly impact many industries. 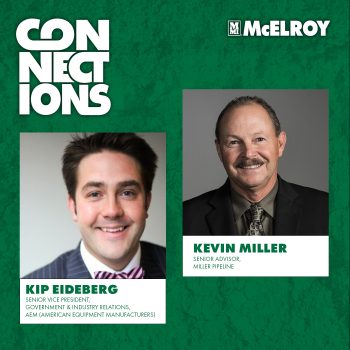 McElroy CONNECTIONS
An Update on the Bipartisan Infrastructure Bill

The bill seems to be on the move, but where do things stand? Breaking all of this down, Connections host Tyler Kern welcomed two guests – Kip Eideberg, Senior Vice President, Government & Industry Relations, Association of Equipment Manufacturers (AEM), and Kevin Miller, Senior Advisor, Miller Pipeline.

Eideberg began with an overview of AEM and its interests. “We represent the equipment manufacturing industry. My role is one of policy and advocacy.”

Miller Pipeline’s primary business is gas distribution work, but they also have a division that supports the wastewater industry.

Eideberg then provided an update on the infrastructure package. “I haven’t seen this much positive momentum for this in at least 10 years. It includes $1.2 trillion in funding for transportation, water infrastructure, broadband and the power grid.”

Miller commented that he expects the bill to drive more work for his company. “The water rehabilitation of lines and doing away with lead pipes is encouraging news. They have been neglected for years.”

Of course, challenges can still hinder the bill’s progress. “If Congress can put policy ahead of politics and move with the bipartisan deal, that’s what could derail things,” Eideberg said.

Miller also noted that the labor force and getting the right equipment pose concerns, as well. “The labor force for underground construction was stretched before the pandemic, and lead times on equipment have gotten longer.”

“We can’t find enough talented people, especially younger ones, to get into the industry. When the money would start flowing is another question. If it goes to existing programs, it could be within six months. If not, then we’re looking at 2023,” Eideberg added.